In the morning I had a bit of ‘Petra belly’ and my knees were weak after yesterday’s journey, so I am inviting fellow traveller – Daniel B – the youngest and fittest of the hardy nine to write about the mornings excursion back to Petra. I will then pick up the narrative for our afternoon trip to the Wadi Rum – our night at a desert camp under the starry starry night.

Thanks Shane!  Day 10 of our trip was certainly action-packed, and we were all feeling a degree of soreness and fatigue after our journey to the magnificent Treasury and Monastery Facades. Day 11 saw us begin our journey just past the Petra visitor centre but shortly before the entrance to the famous Siq. It was at this point that we branched off along the Al-Madras trail.  According to our guide Eid, this was a “secret” trail that would lead us to the heart of Petra.  While certainly not a secret these days, the trail is certainly not as well known as the famous Siq. There were hardly any other tourists aside from a half dozen German backpackers who we met along the way, so we were relatively undisturbed for most of the journey which was a welcome change from the large crowds gathered at some of the better-known attractions.

The Al-Madras trail is approximately 4-5 kilometres long, with moderate to hard levels of climbing up and down the hills of Petra.  Walking along the trail allowed us to observe some of the landscape of Petra which was previously hidden on our journey yesterday.  While mostly barren, we saw some varieties of plant life (Sea Onions being the most predominant plant although I’m yet to research this name given Petra is quite a distance from any ocean front that I’m aware of) along with herds of goats being looked after by local shepherds (mainly young boys of around 10-12 years of age who would scamper over the rocky hills quicker than we could walk on the relatively flat designated trails).

Along the journey we saw a few features in the local landscape.  Guard houses (man-made caves carved into the rock face) were the most common feature.  The design and location of these caverns was clearly on show as they gave magnificent elevated views of the surrounding region. This would have aided the original Nabataean inhabitants to spot any approaching visitors (unwelcome or otherwise) to Petra.  The location of the guardhouses to each other also showed a canny design as communication would have been a possibility to pass on basic signals over medium to long distances (perhaps by sound or light signals?).

After a journey of approximately three hours we began to approach our destination, two ancient ruined Obelisks.  This marked the final ascent up to the High Place of Sacrifice.  After a further 20-minute climb up some relatively steep steps and rock formations, we arrived at the High Place to find a rocky plateau carved into the peak of the hilltop.  It was here that the Nabataean’s would conduct religious ceremonies with a backdrop overlooking much of the city of Petra.

Some of the sights visible at the top of the mountain side were of the Theatre (an outdoor amphitheatre carved into a mountainside able to accommodate 4000 people) and the Street of Facades, the name given to a row of monumental tombs, similar in nature to the famed Treasury.  While the journey up was certainly arduous and challenging, the elevated views of Petra were magnificent to observe and a great reward for our efforts to reach the top.  After a short break for refreshments, we continued our journey down the mountainside and exited Petra via the Siq, saying a final farewell to the Treasury along the way to continue our journey on to Wadi Rum.

Back to you Shane…….

The afternoon saw us drive towards the Wadi Rum – and our destination – the Rainbow Camp. Wadi just means ‘Valley.’ This entire area has been turned into a reserve with a few desert camps for visitors. After a quick stop at the Visitors Centre to see the rock formation – the Seven Pillars of Wisdom we soon exchanged our minivan for a number of 4×4’s. Most of us sat up top in the ute tray at the back which had a shade cover. The vehicles looked like they had been built in the last quarter of the last century but managed to do the job. Our camp was about twenty-five k’s in. We stopped at the Lawrence Spring – a resting spot for camels and the place where the only two trees flourish in the entire valley. Another stop to marvel at an actual huge red sand dune and then we arrived at camp.

About 15 canvas two-person canvas tents – very basic – a lovely toilet/shower block and then the covered resting area where we rest upon carpet for Jordanian tea! The highlights include watching the sun go down over the desert – the absolute absence of man-made sound – the hungi style dinner cooled in a pit – and of course – the stars of the night sky which blew us away! One of our nine -Ian – who has a good knowledge of the night sky – pointed out the four planets we could see very easily – Mars, Jupitar, Saturn, and Venus. When the camp lights were switched off it was easy to imagine ancient peoples looking up and being mesmerised by this overwhelming sight.

A truly magnificent way to finish another day – Ahh the serenity! 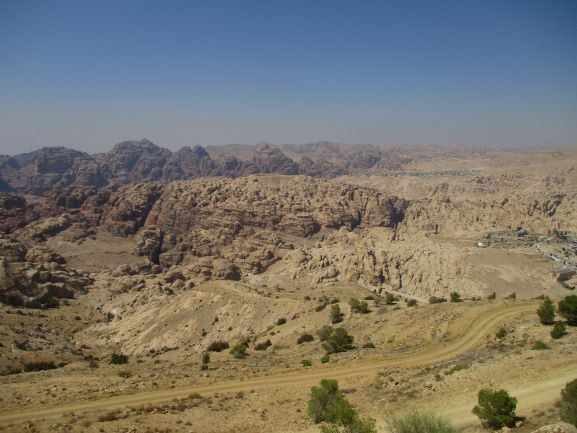 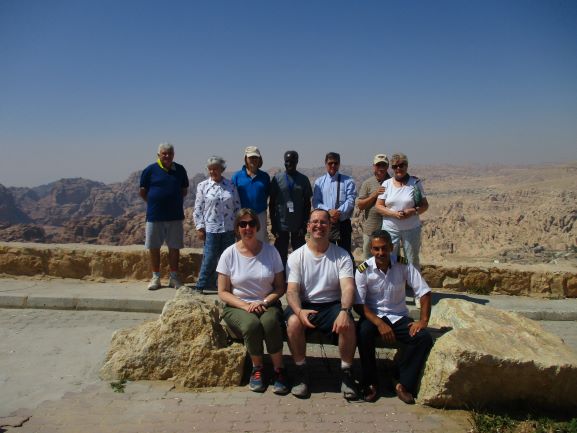 Our group with Eid our guide and Farah our driver 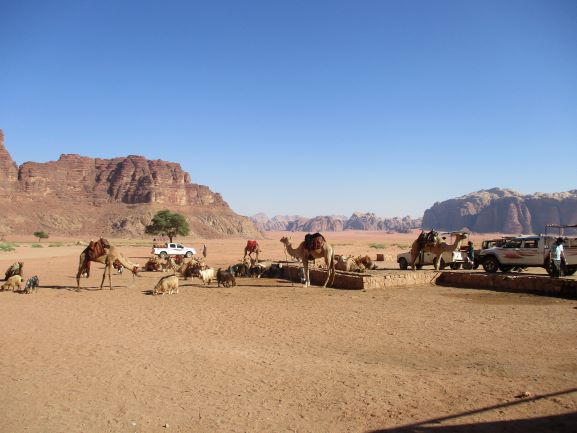 Lawrence Spring – with the only two trees.

Our transport across the desert 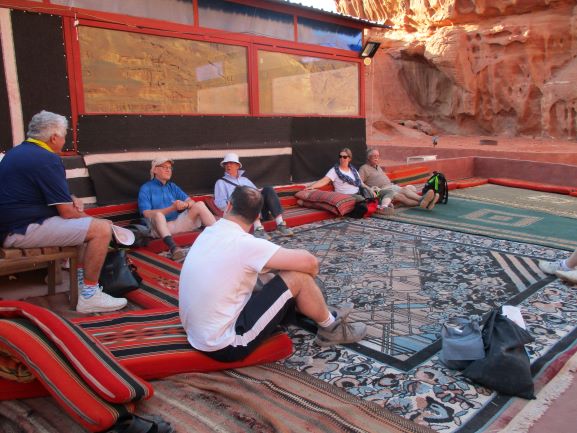 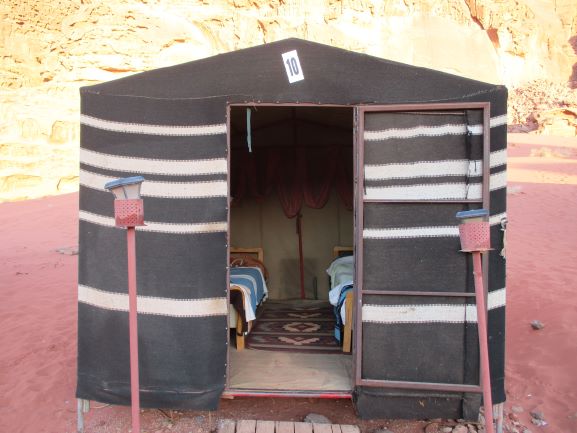 Our tent for the night

One thought on “Between a rock and a hard place (actually a bona fide desert!) Or- smell the serenity!”