According to the information booklet we were all given upon arrival at the Visitors Centre:

It is not known precisely when Petra was built, but the city began to prosper as the capital of the Nabataean Empire from the 1st century BC, which grew rich through trade in frankincense, myrrh, and spices. Petra was later annexed to the Roman Empire and continued to thrive until a large earthquake in 363 AD destroyed much of the city. The earthquake combined with changes in trade routes, eventually led to the downfall of the city which was ultimately abandoned. By the middle of the 7th century Petra appears to have been largely deserted and it was then lost to all except local Bedouin from the area. It was not until 1812 when a Swiss explorer Johannes Burckhardt ‘rediscovered’ the ‘lost city’.

This city is truly worthy of being ‘a world heritage site’, and we were all eager early today to see it. We had been prewarned about the temperature and the need for lots of water for the day. We had also been warned about this being one of the more ‘punishing’ days on the body – walking, climbing, and staying cool.

Luckily – there was breeze early and the temperature was in the 20s – something we had not seen for the last 10 days! It did warm up later in the afternoon, but we were able to see a lot in relative coolness.

The great monument that is the ‘Treasury’ is the more famous and well-known. It is approached by walking along the ‘Siq’ (which means gorge) – a 1.2k winding and slowly descending path between the cliff face until one enters and beholds this awe-inspiring façade.

We walked on and passed the ‘Theatre’ – a 4000 seat amphitheatre carved into the rock face; passed the ‘Nymphaeum’- semi-circular public fountain; walked on the ‘Colonnaded Street’; went up to see ‘the Church’ – built at the end of the 5th century and destroyed by fire/earthquake later. We saw the ‘Royal Tombs’ carved out of the mountain face.

After lunch – many faced the real test of the day – do we soldier onto the see the ‘Ad Deir – the Monastery.’ The problem was that it was a further walk followed by a climb of 845 rock hewn steps straight up! Many turned back but a few of the hardy nine ventured forth! D was the true hero as he along with the guide went up and back. J and yours truly took what we thought was an easier option – to ride mules to the top! This was scarier than I thought with you perched on an animal – peering over the edge of the rock face – looking death in the eye if you fell off. But we both managed to get to the top and along with D marvel at the ‘Monastery’- one of the largest monuments in Petra (over 48m high!) deeply and beautifully carved into the rock. I decided for my sake and the animal’s that I would descend on foot all those stairs. We all made it safely if all exhausted back to Petra’s opening and slept well this night.

The view from our Hotel as the sun rose

Approaching Petra – our guide Eid to the left, J in the middle, and D on the right 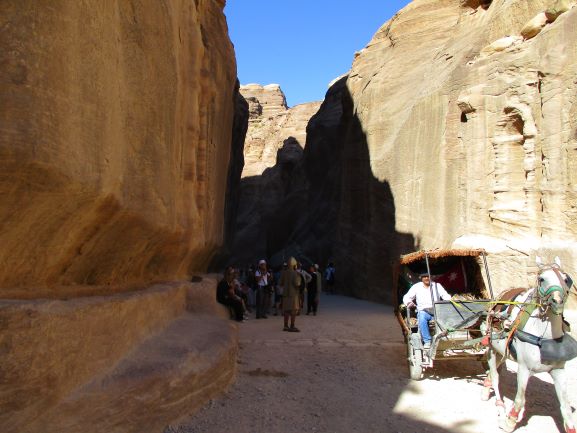 the start of the ‘Siq’ 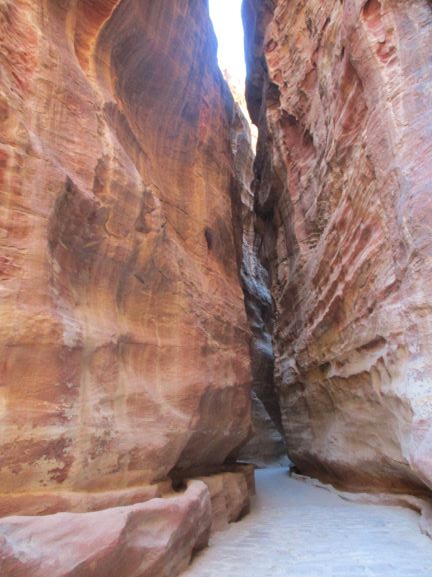 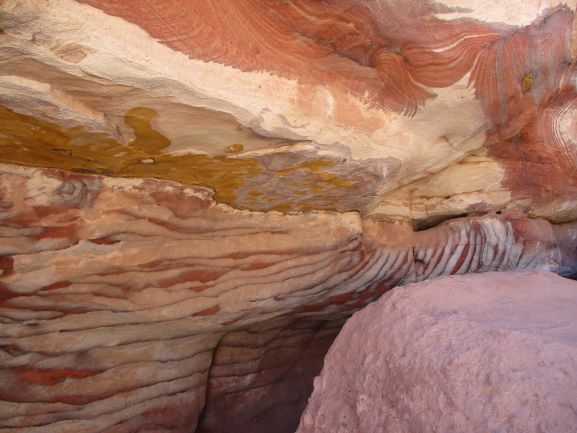 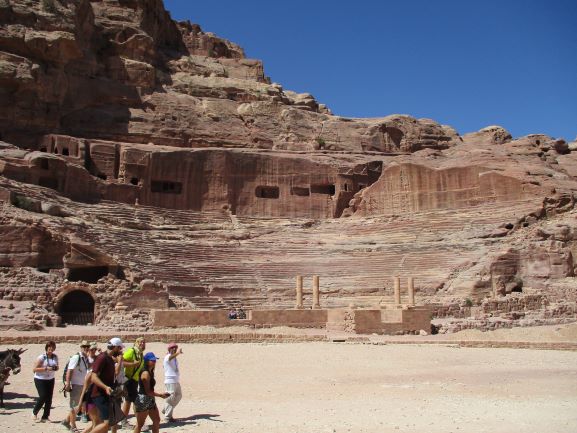 I made it to the top – the Monastery 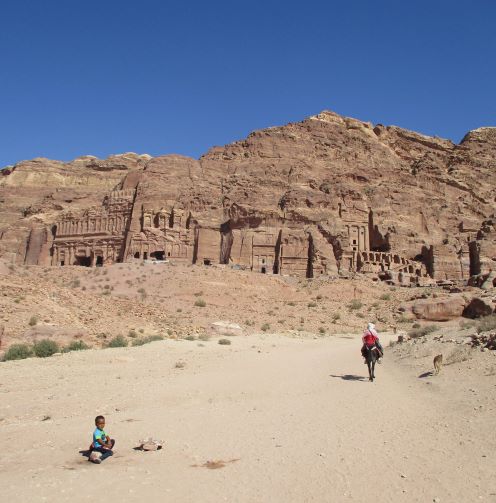 The Royal tombs hewn high in the rock; a little boy sadly sitting in the sun selling little bits of rock; and J on donkey riding back