We left the Dead Sea early this morning, fearing a long-complicated process for crossing the border at the Allenby bridge into Israel. While it took about an hour-and-a-half it did go smoothly – thanks to our new driver for the crossing who managed to wangle our tiny mini-bus in front of two large coaches and be first in line. Robert’s artificial knee held us up at the Israeli end along with Conrad’s C-Pap sleep machine. The tiny and polite but stern lady doing the inspection had us all in giggles as she carefully patted Conrad’s bag down, then slowly un-zipped it and exposed for all the world to see, Conrad’s unique packing style! She was thorough with her testing of every element of Conrad’s machine along with going through every bit of paper and all the books in his case. Finally satisfied that all was well – we went on to meet our new guide Maher (pronounced My – hair) He was also the driver and was full of information as we sped along the beautiful roads, passing Jericho and on into Jerusalem. He did do a bit of explaining about the different political situation with the Palestinians as well as Israel’s four border neighbours – Egypt, Jordan, Syria and Lebanon. It was a surreal moment seeing Jerusalem for the first time. All the hype and expectations faded as we realised we were here at last.

Our hotel for the next three nights is the 7 Arches Hotel on the top of the Mount of Olives. The view overlooks the entire city and I imagine one could never tire of it. After checking in, Maher left us to our own devices for the afternoon. Not wanting to waste a moment I hired us a driver and van to take us to the highly recommended market – Mahane Yehuda. The Mahane Yehuda Market (aka The Shuk) is the largest market in Jerusalem and one of the most famous in the Middle East. Once a shopping and dining centre for the working class, the shuk has transformed into one of Jerusalem’s main cultural centres. It was packed with shoppers wanting to get goods before the Shabbat began around 5pm when everything in the Jewish Quarter closed. The sounds, smells, and colours were almost overwhelming. It was a delight to interact with people for a change and not look at temples, ruins, castles, or tombs!

Our driver, who introduced himself to me as “Just call me Kojak” (mainly because of his bald head), then drove us to just outside the old city. We walked up and through the Dung Gate and made our way to the Western Wall (or Wailing Wall) – the only remaining section of the Jewish Temple in Jerusalem. Women on one side and men on the other – we men all donned our Kipa’s/Yarmulke’s and said a prayer at the wall. It was a moment not to forget.

Tomorrow we begin our exploration of the city in earnest in the morning before heading to Bethlehem in the afternoon.

Our hotel for the next three nights

The view from the front of the Hotel! 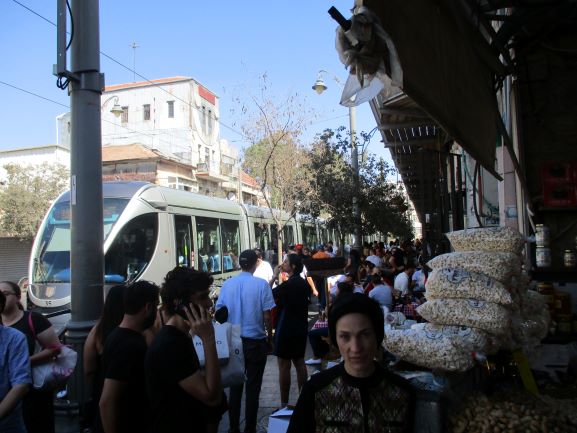 A modern cheap tram system well used by the locals!

Entering the Old City via the Dung Gate 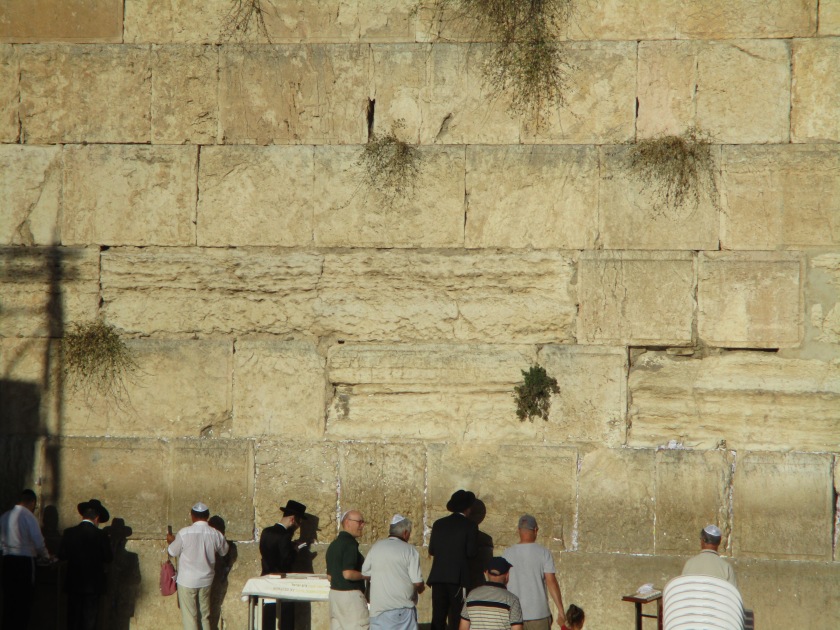 Robert, Ian and Lewis at the wall

Yours truly and Mrs J at the end of a long day!